Win the Game of Office Politics 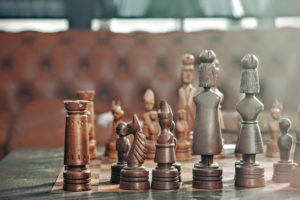 If you view office politics as a dirty, slimy way to get ahead, I’m here to suggest playing this game doesn’t have to be manipulative or sleazy.  In fact, it’s one of the most direct, smart and savvy ways to make your mark and build connections with those that count.

Yet, who can blame you for not wanting to play the game? After all, the media showcases political candidates jockeying for position spouting rhetoric, pretending to be everyone’s friend and accusing others of foul play. We see movies and television shows depicting these same behaviors, and too often we see it within our own offices.

Here are three rules to authentically win the game of office politics without disrespecting others:

Rule #1: See it as a game. Just like in any board game or sport, there are rules you must follow. The same holds true with your career. Decide to get off the sidelines and take a position as you can no longer keep your nose to the grind-stone hoping your hard work will speak for itself. Key stakeholders and supervisors, consumed with their own responsibilities, may not know your goals or which projects you spearhead without your input. Self-promotion is no longer a choice, but a requirement to move forward in today’s work world. Eliminate boastful methods and look instead for organic moments to state outcomes of assigned activities.

Rule #2: Play fair. Every conversation, decision and interaction with others can come from a place of respect and honesty. Office politics does not require you butter up others with false flattery or put another down to get ahead.  Stay true to character and simply look for truths you can share. For example, if you’ve admired a key player’s work, speak up. For example, “I saw the new marketing plan from your team. Thought the tag line was clear and compelling.” Never formally met the key player before? Follow up your comment with a self-introduction. “By the way, I’m Cheryl Hansen from development.”

Rule #3: Know the players. Office politics is all about maintaining relationships and getting results. Take time to learn more about each player from a strategic point of view. What makes them tick? What are their hobbies, interests and strengths? Given the internet, there’s no excuse not to do your homework. Again, this is not manipulative, but smart. For those of you saying, “Oh, this just isn’t me. I’m a straight shooter.” I challenge you. Perhaps you’ve known who to approach and what to say within a department to move a project forward faster.  Leveraging your network of connections built over time is far from slimy. People enjoy assisting those who have earned the right through prior support and genuine interest.

Office politics doesn’t have to be sleazy or underhanded. Choose to build solid connections through forth-right and honest actions.

For additional, customized information on connecting with your employees, colleagues, and customers, click HERE.

5 Ways to Create Boundaries (to Avoid Workplace Burnout)
May 8, 2022