Are you Flaking Out on Others? 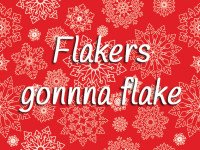 One of my coaching clients recently hosted a direct sales party. If you’re unfamiliar, the get-togethers follow the Tupperware party model, but showcase everything from cooking tools to clothing, anti-aging creams to adult toys. Fifteen people said they would come, and eighteen more said maybe. Not wanting to run short, she made a full spread of appetizers, deserts, and drinks which she ate for the next four days. Why? Only three people showed up!

After apologizing profusely to the gal who dragged all her wares over to show, the conversation turned to how often people no-show after saying yes to a commitment. The party “salesperson” shared her colleague had eighteen party cancellations in two months. The hostess confessed she had missed a couple obligations recently and started to wonder if commitment karma was paying her back.

So, I’m asking you, what is the value of your word when it comes to invitations? Sure, we all have valid examples of times we had to opt out of a situation due to a true emergency. But I’m talking about the times when you simply changed your mind in the eleventh hour due to an inability to speak your truth from the get-go or because you realized you tried to tackle too much in one day.

Over the years I’ve surveyed many sales people, associations, networking groups, and hosts about this situation. Although each individual wishes they could have full participation, everyone vocalized they would rather get an honest answer or a “no” upfront, rather than a cancellation later. I’ve heard, “It seems no one keeps their word anymore. I understand things can change, even right before an event. At least have the decency to send a quick text or call that you can’t make it.” I’ve had meeting planners who held prime seats upfront for companies that purchased tables for an event, only to have them remain empty. Not knowing if someone would show at some point, they kept them available, rather than have people in the back move forward and claim a better view.

This lack of commitment morphs into a lack of credibility. It happens with political leaders and companies too, but let’s focus on what we can change – ourselves.

Reflect for a moment on with whom you keep your commitments.  If you keep your word to coworkers, your boss, clients, but let down the people closest to you, perhaps it is time for some change. If you say yes to everyone else but yourself, maybe it’s time to reprioritize your personal needs.

With holiday opportunities showing up at every turn, take the time to speak your truth. Remember, everyone is busy at this time. Is it any less important to keep your word just because you’re busy? Prevent the fall-out by being proactive.

Here’s some phraseology that might make it easier: “I would love to (fill in the blank), however, I’m overextended. If something changes, I will try to come, but please don’t count on me.” Or “I’m overextended right now, yet appreciate being included.”

Give this gift to yourself and others, not just through the season, but all year long.

Judging Too Much? 3 Strategies to Judge Less, Connect More
July 6, 2021

Why Leaders Must Choose Compassion Over Empathy
April 7, 2021

Why You Must Choose Rituals vs. Resolutions
January 22, 2021